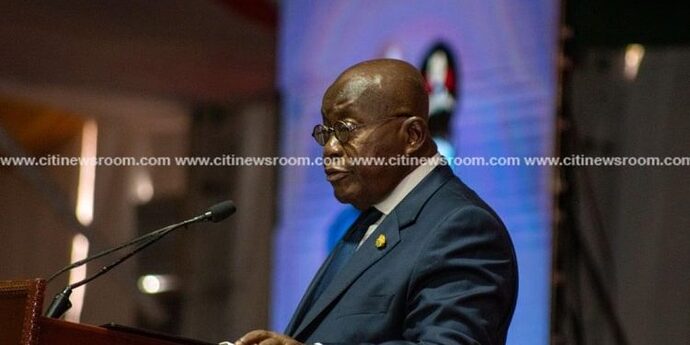 The President, Nana Addo Dankwa Akufo-Addo, has commended the acting Auditor-General, Mr. Johnson Akuamoah Asiedu for his work in the fight against corruption since his appointment.

President Akufo-Addo said Mr. Johnson Akuamoah Asiedu has demonstrated the quality of work and independence of view so far.

According to him, those are clear indications of his professionalism and readiness to fight against corruption.

The Audit Service Board appointed Mr. Johnson Akuamoah Asiedu to succeed the former Auditor General Daniel Yao Domelevo as acting Auditor-General in August 2020, after the latter was asked by President Akufo-Addo to proceed on his 167-day accumulated leave.

Speaking at a meeting with members of the Ghana National Anti-Corruption Coalition at the Jubilee House, President Akufo-Addo said the recent revelations in the Auditor-General’s report indicate that he will be independent.

He thus mentioned that processes are underway to confirm him as the substantive Auditor General.

President Akufo-Addo further added that Mr. Johnson Akuamoah Asiedu in his short stay in office has been able to do things that the “most touted” Yao Domelevo couldn’t do.

He concluded that per these few achievements, his confirmation process will gather more public support.

“The Acting Auditor-General has demonstrated sufficient quality and independence of view. For instance, he is responsible for some things that are unheard of. In our history, the 12 statutory reports that have to be compiled and placed before Parliament in the year of Parliament, this is the first time it has ever been done.”

“Even the most touted Auditor General before him never managed to do it and this one has done it. I think on the basis of the work that he has done, the independence with which he has gone around with his work, if today efforts are made to confirm him, I believe it should be done, and that confirmation process will gather more public support.”

How was Domelevo retired?

Domelevo was asked by the President, Nana Addo Dankwa Akufo-Addo, to proceed on accumulated leave.

On March 2, a day before Mr. Domelevo was scheduled to return from his controversial forced leave, the Audit Service Board questioned his nationality and age.

The Board claimed Mr. Domelevo should have retired in 2020 and that he was a Togolese.

The Audit Service Board, based its claims on records at the Social Security and National Insurance Trust (SSNIT) provided by the Auditor General.

Mr. Domelevo however refuted these claims in further correspondence.

The Presidency endorsed the retirement claims of the Audit Service Board and said it considered Mr. Domelevo retired.

“The President is of the view that you [Domelevo] have formally left office,” the letter from the presidency said in response to the date of birth concerns.

In a letter, the Presidency thanked him for his service.

Although critics and Civil Society Organizations have said the President acted in bad faith, Nana Akufo-Addo said his decision was justified.