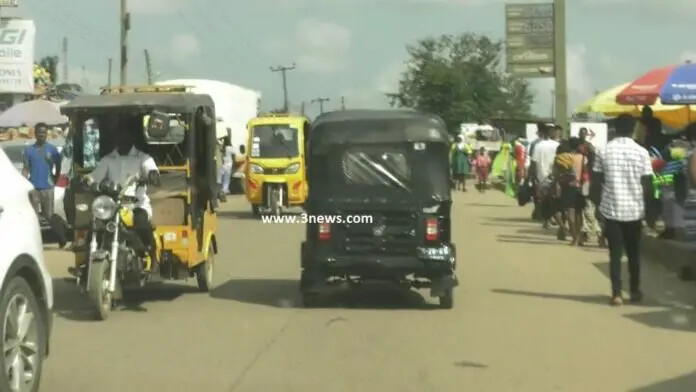 Twedie Magistrate Court in the Atwima Kwanwoma District of the Ashanti Region Thursday September 2 slapped seven motorcycle and tricycle riders with a fine of GH¢2,100 for flouting road traffic regulations

The seven accused persons, who were arraigned before court, were arrested on Wednesday and Thursday during the an operation launched by Ashanti Regional Security Council (REGSEC) and the Motor Traffic and Transport Department (MTTD) of the Ashanti regional Police Command to rid the region of indiscipline on various roads.

Presided over by His Worship Josia Cobinah, each of the accused persons was paid GH¢300 for breaching the road traffic regulations.

Spanning from riding without license, riding on the shoulders and median of the roads to overloading, the offenders were grabbed during the MTTD operation.

The Ashanti Regional MTTD led by Superintendent Emmanuel Aduboahene reported that “with just two days into our operation to clamp down recalcitrant riders, on Wednesday, we arrested 8 persons and released 3 after they subsequently presented their valid licenses so we prosecuted 5 at the Akropong Circuit Court. The following day Thursday we again arrested 8 riders and released 1 after he also presented license so we arraigned the 7 before the Twedie court.”

These figures underpinned the operations launched to flush out indisciplined motor and tricycle riders who have been contributing to the road carnage in the region.

Mr Aduboahene assured the Command will not relent on its moves to clamp down on illegal riders to ensure sanity on the roads.

How much money do they even make in a day eiii​:joy: