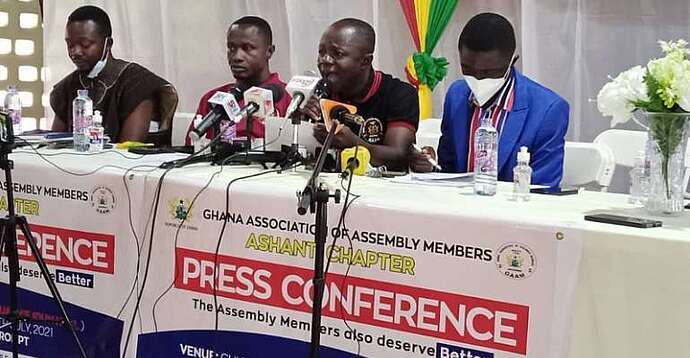 The Ashanti Regional chapter of the Ghana Association of Assembly Members (G.A.A.M) has stressed the need for government to establish an ‘Electoral Area Common Fund’ in all districts in the country to help the work of Assembly Members.

At a press conference held at the Kumasi Cultural Center, the Association indicated that in spite of the role Assembly Members play in the development of their communities, they are less recognised by government.

And to ensure that the Local Government sector is revamped to enable Assembly Members enjoy salaries among other emoluments, the Association is as a matter of national interest calling on Parliament to amend Article 250 clause 1&2 of the 1992 constitution and section 11(2) of the Local Government act 2016 (Act 936).

According to the Assembly Members, the era where the successive governments use sugar-coated words to cajole Assembly Members is over as they are resolved in their pursuit to ensure that their fight for new reforms becomes reality.

Good afternoon honorable members, good afternoon the media and all other observed protocols. Today happens to be a special day for all members present. Today is part of series of press release, the Ghana Association of Assembly Members (GAAM)-Ashanti chapter is embarking upon. The executives are more than happy to see your presence and hope to see more and more people getting involved in this registration exercise.

GAAM is an amalgamation of hon. assembly members from different districts, municipal and metropolitan, regional and national areas bound by one common goal, uniting to champion its agenda. GHANA ASSOCIATION OF ASSEMBLY MEMEBERS was formed immediately after the 17th December 2020 district level and unit committee elections across the country.

Ladies and gentlemen of the press, our main aim of gathering here is about the welfare of thousands of honorable but dishonored Assembly Members. The plight of Assembly Members under successive governments has not been anything but humiliating and subjective to say the least.

GAAM seeks to achieve its set goals and objectives and to remedy the anomalies and discrepancies in providing for the welfare of Assembly Members. It seeks for a united front aimed at ensuring the socio-economic development of all assembly members in line with their work

Even though the Assembly Member is the fulcrum of which the load and efforts rest in the wheels of local governance, his fate is subjected to that of VOLUNTEERISM and the ability to pay syndrome. It is shocking to know that as the mouthpiece of the people in the electoral area, what assembly members get as a reward is insults, abuses, disrespect, and in some cases congenial hardship coupled with stress. That is why the old use to say that when you are elected, you are elected for insults not for anything.

Most compounding challenges of assembly members is the difficulty in attending meetings, insufficiency in sitting allowances, major and minor repairs as initiated projects from the assembly members own resources, tagging assembly members as wealthy and expecting us to always provide for our electorates, the biggest question is what do we get in return?.

It is shocking to know that some assemblies as at now are indebted to former assembly members for their end of service benefit due to the meager internally generated fund. This is the more reason why assembly members are crying that it is high time the government considers our cry AND THAT THE EMOLUMENT OF ASSEMBLY MEMBERS SHOULD BE CHARGED ON THE CONSOLIDATED FUND in order to address the inequalities in the payment of ex-gratia.

Many hon. members are in a saddened state. The many zeal and enthusiasm that characterized the picking of forms, campaigning and receiving of the people’s mandate has all waned down. With huge investment in community development, what we get in appreciation is depreciation. ASSEMBLIES ARE PAYING GH1500 AS OUR END OF SERVICE BENEFIT. This is a slap in the face of assembly members come to talk of its indebtedness even with this money. Our men and women are leaving their matrimonial homes due to the hardships we face as hon. assembly members.

Members of the press, assembly members perform similar functions as the Member of Parliament albeit Law making at the local level, but what do we see? At the end of his tenure as an elected Assembly Member, his end of service benefit is tied to the meager Internally Generated Fund of most assemblies who are terminally and patently cash strapped. Sitting allowances are in perpetual COMA and on credit bases for very long periods of time despite his/her enormous financial encumbrances in our line of duty.

The Assembly member performs a herculean task in his/her electoral area of jurisdiction than members of parliament due to everyday interaction with the grassroots in the district. The same cannot be said of Members of Parliament who at most times operates an absentia in the district and constituency is catered for massively than assembly members.

Funerals, weddings/ engagements, carrying of dead cops to the mortuary, settling of chaotic disputes, taking part in communal labor, explaining government policies and above all serving as the link between the government and people is always ignored with uttermost disdain and contempt but yet still his/her reward is motorcycle and an end of service benefit which does not guarantee future hopes for the number of years served as an elected member of an electoral area.

Ghana Association of Assembly Members has given birth to champion the cause of all Assembly Members with vehemence and desired set objectives. Without a shred of doubt ladies and gentlemen of the press, GAAM is advocating for equity as enshrined in the 1992 constitution, for better welfare for its members and would want the government to take notice and served that the period of intransigence on the part of successive government in invoking the right structures to curb the obnoxious, demeaning and dehumanizing working conditions of Assembly Members are over.

Therefore, ladies and gentlemen of the press, the Ghana Association of Assembly Members is demanding for change for better condition of service for Assembly Members. GAAM states in no equivocation that:

Without amending this clause, the question is how will the mushroom and smaller district assemblies get resources to finance the activities of the assembly members. There will be perpetual indebtedness.

We have gathered here today to draw the nation’s attention to the fact that it is high time that government and for that matter parliament amend the constitution of Ghana so that assembly members will be considered in the constitution.

We are by this means reminding the president of the promise he made to assembly members when he promised to create assembly members common fund. This initiative if implemented will not only save assembly members from using their own resources to finance community activities, but will also ease the pressure on M.Ps and enhance rapid development.

We are also calling on all Members of Parliament to support this call from assembly members and help make the necessary amendment in the constitution. M.Ps should not overlook the important roles assembly members make. Most of our M.Ps has been assembly members before and they have encountered these challenges before, but surprisingly nothing is being done to ameliorate this canker.

None of the best architects can build a strong house by first putting up the roof before the foundation works, such a house cannot stand the test of time. Unfortunately, this is how the country has been run since independence.

Lastly, GAAM and its membership across the length and breadth of the country would want to assure the government that we would work to ensure good policy formulation and implementation that seeks to ensure the vision of any successive government that cares for the well-being of Assembly Members.

GAAM wants to assure the government that the days of Assembly Members being toyed and teased with vain rhetorical campaign promises which fizzle out after elections is over.

GAAM, therefore wish to assure the government that should the needs of its members be consigned to the trash as always, we would have no option that to advise ourselves.

This is why I’m a staunch advocate of decentralization. The resources must trickle down to the lcoal assemblies so they solve solutions the best way that fits them. Everything is now centralised and before an assembly member get some money for their area, it must have taken more than ever.

This is a necessary suggestion obviously, the process in which these funds get to the assembly takes time. I think the proposal should be taken into consideration honestly, it might help