A fatal crash involving a Benz Sprinter mini bus and an Opel Astra taxi on the Wenchi-Techiman Highway has resulted in the death of one person and injured four others.

The Wenchi Municipal Commander of the Motor Traffic and Transport Department (MTTD) of the Ghana Police Service, DSP Kofi Oduro Amponsah said his outfit was called to the accident on the Wenchi - Techiman Highway just after the Nkonsia Police Barrier on Tuesday evening at about 6:00 pm.

DSP Amponsah explained that the Sprinter which was traveling from Kumasi to Wa attempted to overtake a vehicle ahead of him leading to the head-on collision with the Opel Astra which was heading towards Techiman from Wenchi. 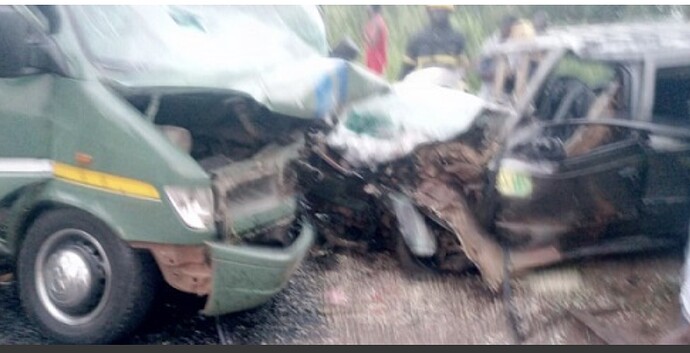 Wrongful overtaking is disastrous. Most our roads doesn’t encourage overtaking so if you insist, that might be an ‘obituary’. May the lost soul rest in peace and speedy recovery to the injured.

This is very sad. Just one mistake and look at what has happened