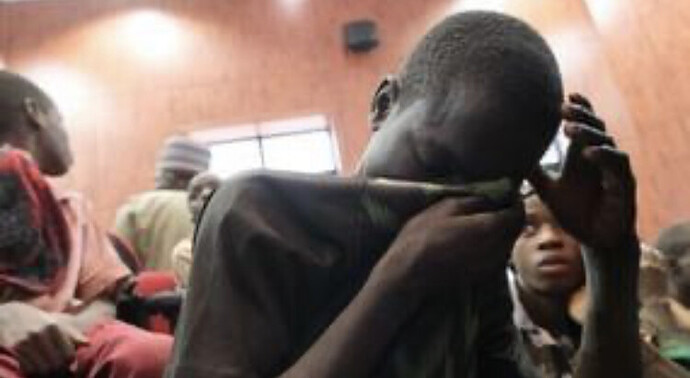 A nine-year-old boy has narrated how he escaped from his alleged kidnappers who placed him in a sack.

The kidnap incident occurred at Kasoa Transformer in the Awutu Senya East District of the Central Region.

The boy, Philip Ametepey, narrating the ordeal said his mother sent him to buy a blade, and on his return, he met the kidnappers.

According to him, he was tied and placed in a sack but remembered the blade he bought.

He stated that he used the blade to cut the sack and eventually managed to escape. The incident happened on the evening of Thursday, September 2, 2021, around 7:30 PM.

He said: “I was really suffering in the sack but when I remembered that my mum’s blade was in my pocket I removed it and used to cut the sack and I escaped without them noticing.”

Meanwhile, the Kasoa Regional Police Command has launched an investigation into the matter.

I don’t even know what is happening to Kasoa. It is like all the bad people are in Ghana are there

The boy is very lucky he got away, who knows what would have happened to him. God have mercy on our homeland Ghana

Anyone remembers the two boys that killed another boy in an uncompleted building for money rituals at Kasoa this year?

The boy sef smart pass them

I don’t know what kasoa is turning into. I get goosebumps whenever I hear about that place

Eei Kasoa again? What’s it about this fast developing metropolis and heinous crimes? It’s becoming too mamany at a time. Today Kosoa this, tomorrow kosoa that. There should military barracks in that part ofor the central region so crimes can reduce

Very smart and brave action. He really forced and the grace of God also located him . That’s yy he was able to escape.

I think there have to be a serious curfew in kasoa cos things are really getting out of hand over there. Now a days almost every bad thing is coming from kasoa

Hmm, I remember that quite well. When I think about the occurrence, I don’t feel well. It’s often depressing, but there’s little we can do about it, and that doesn’t stop it; it governs it. As the good old book foretold, wicked men and impostors have progressed from bad to worse.