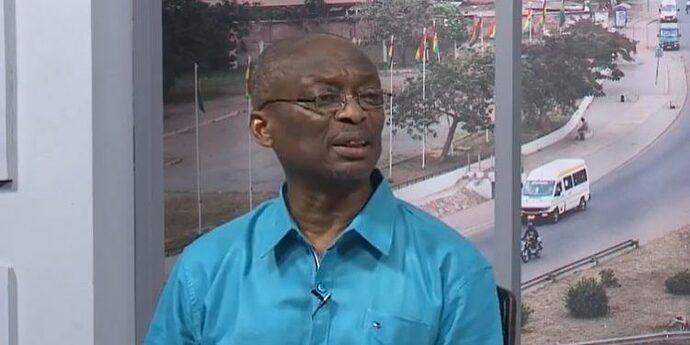 Kweku_Baako-GMG-750x375750×375 38.9 KB
The Editor-In-Chief of the New Crusading Guide newspaper, Abdul Malik Kweku Baako has downplayed the magnitude of the $5 million bribery allegation made against the Chief Justice, Justice Kwesi Anin-Yeboah.

According to him, the allegation is unfounded and should be treated with the contempt it deserves.

“This is useless and malicious, and it should be thrown into the trash can. It will not go anywhere. I don’t believe any iota of the allegations, but I am just an individual. This is patent rubbish,” he said.

A private legal practitioner, Akwasi Afrifa while responding to a petition filed against him at the General Legal Council alleged that a former client he was representing at the Supreme Court told him that the Chief Justice had demanded a US$5 million bribe from him to allegedly influence a court case in his favour.

Anin-Yeboah has denied the allegation and petitioned the Director-General of the Criminal Investigations Department (CID) of the Ghana Police Service to investigate the matter.

There have since been calls by the opposition National Democratic Congress (NDC) for the Chief Justice to step aside while investigations are conducted into the allegation.

The General Secretary of the NDC, Johnson Asiedu Nketiah at a press conference on Tuesday, 13th July 2021 argued that this will allow for a fair investigation to be conducted into allegations of misconduct levelled against the Chief Justice.

“The difficulty with this is that the investigations would concern the Chief Justice, who is the subject of the bribery allegations in this matter and in whom disciplinary authority against Judicial Officers is vested under Section 18 of the Judicial Service Act.”

“Good governance dictates that the Chief Justice steps aside during the pendency of the investigations by the Judicial Service relative to the issue of alleged misconduct on his part as a Supreme Court Judge. The Chief Justice cannot be a judge in his own cause, hence cannot set up a committee to investigate allegations of misconduct against himself.”

Why should such a serious and damning case be thrown our of court? For what reason? The same court that will imprison someone for stealing mobile or fish from the market?

You see why I was saying that the laws of this country are inimical to development and growth. This laws favor only the highly connected, powerful and rich in thevery society. It’s a pity those that must know better are loose talking.

Kwaku Baako should spare us that gibberish and allow dus process and justice to work. No one is above the law. If the CJ is alleged to have engaged in in a corrupt act as this, let the law deal with him.