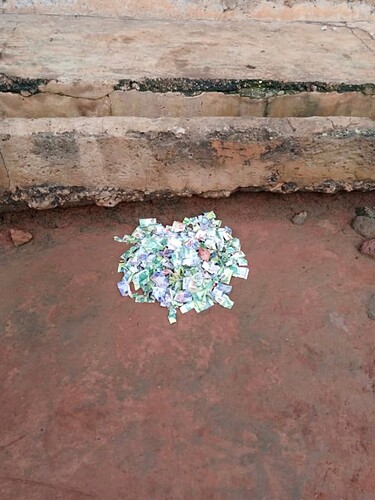 55 years old Yaw Baah resident in Techiman woke up to find a heap of torn Ghana Cedis notes behind his window and has returned it to police.

The man worried and not sure of where the money was from reported what he had seen behind his widow to the Techiman Police.

The Police moved to the scene to find torn notes of Ghana cedis which included GHC 50, GHC 20 and GHC 10 notes which amounted to several thousands of cedis.

The personnel of the Ghana Police Service who visited the scene took photographs and sent the money to the station for further investigation.

Ghana here generousity still works wow. The way Ghana is hot I don’t think that I will find that money and return it, like if it was me by now I’m cruising around in a Range Rover

Or fear. The money looks as if it’s been deposited by some god or dwarf. You know how our people are superstitious.

There is hope for humanity after all

You know how our people are superstitious.

You’ve said it all. It shows clearly that the man feared to touch the money cos of this superstition believes. If dwarfs or ghost likes let them deposit that money at the back of my window I will spend it perfectly for them

There is hope for humanity after all

Hope? By now that man use to pray to God to do something great and unimaginable for him and it did happened too he was afraid to spend it

I don’t think he would have returned the monies if it wasn’t torn​:joy:

The old man is a Christian and is afraid to die and not go to heaven.

if not he wouldn’t have returned the money

@Magda2000 This man paa how certain are you that you’ll make it to heaven. Me I will spend that money today, tomorrow and the next. I’m hot erh

who no fear death

Bro man for fear death oo but me currently the way I’m hot I won’t even think twice, I will pick those money and patch them all and enjoy . All die be die

Ei I thought I am the only one who is hot oo. Bro whiles picking those money I will be playing Yagye sika alongside​:notes:

On a loud speaker chale🎤

Yh i agree with you one hundred percent.
We all should imitate the good example of the man.

Even Bill Gate is still searching for money hm​:rage:

Bro it seems he don’t know. The condition right here in Ghana do we return such a money