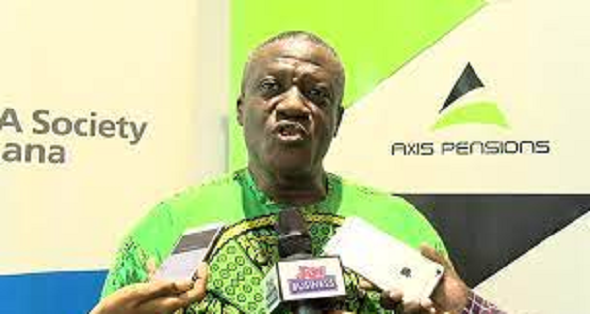 More than half (53 per cent) of the 233,670 pensioners on the Social Security and National Insurance Trust (SSNIT) payroll currently receive less than GH¢1000 per month, Director of Planning, Research, Monitoring and Evaluation at the National Pensions Regulatory Authority (NPRA), Mr Ernest Amartey-Vondee, has disclosed.

This means that cumulatively, 152,895 people earn pensions less than GH¢1000 which represents 53 per cent of the total number.

Mr Amartey-Vondee said this was part of the reasons for the diversification of the pension base which led to the introduction of the three-tier pension scheme in 2010.

He was speaking at a stakeholder engagement organised by Old Mutual Ghana.

“The main reason for the reforms was to diversify the pension’s income base,” he stated.

After January 2010, the pension provision base was diversified and the three-tier pension system was introduced

He, therefore, urged workers to take advantage of the three-tier pension scheme to enhance their pension income.

“The highest pensioner is currently receiving over GH¢129,000 per month. You can reach that level if you contribute appropriately to the right kind of schemes,” he stated.

Mr Amartey-Vondee also noted that one of the causes of the low pension incomes had to do with the National Pensions Act and how it defined salary as the basis of contributing to the SSNIT scheme.

“This restricts the contributions salary to the basic salary but we found that most people receive allowances that are even more than their salaries but the law does not encourage them to contribute based on their basic salary plus their allowances.

“So it makes the basic salary so low and consequently low benefits coming from the SSNIT scheme,” he stated.

He said while SSNIT had an active contributor population of about 1.6 million people, 25 per cent of this number contribute on salaries of GH¢400 or less.

Going forward, he called for the need to consolidate salaries as a basis for contributing to the various pension schemes.

He said the three-tier pension scheme had fared pretty well, 10 years after its introduction, with the private schemes doing much better than the SSNIT scheme.

“If you look at the SSNIT scheme, you get approximately 11 per cent of the contributor’s salary as a contribution to the scheme. The second tier gets about five per cent, with the third tier scheme getting up to 6.5 per cent of your salary.

“But within 10 years, these private schemes have an asset base which is more than twice the asset base of SSNIT and this is despite SSNIT being around for more than half a century.

On how this has helped retirees, he said the results were still unfolding.

“The first batch of people who retired under the three-tier pension scheme did that in 2020 and the regulator is still monitoring that situation, but generally, it’s been very positive,” he said.

Annuity products are products that guarantee pensioners monthly incomes for a period of time and in some cases till death. It requires the pensioner to pay a lump sum to an insurance company which will then be invested and paid back to the retiree on a monthly basis.

“The basic insurance walls are there but there are extra walls for the annuity business. To be able to offer an annuity product, there are additional capital and solvency requirements that you have to meet in addition to what all the other companies are meeting.

He said all these are meant to protect retirees.

“There are other market conduct protections as well and there is a whole framework that will soon be out to protect the annuity business,” he stated.

I don’t really like the idea of paying SSNIT . I want to rather save and invest the money into something profitable for more income. Besides, how many people live till 60 years to claim the benefits? Look at the processes you have to go through to take your own pension money from SSNIT and banks in Ghana

That’s so true my granddad died in 2019 and till date we haven’t been able to claim his SSNIT.
When we go to their office to make claims they demand for all sort of nonexisting documents and tell us to come back some other time. It’s been two years now but still we haven’t received any anything yet

@Magda2000 my family and I have been facing the very same problem. If you go they, they will be tossing you up and down. We gave up mpo