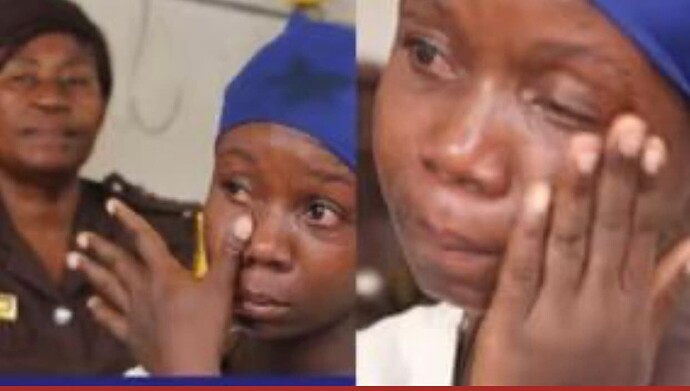 A 24-year-old single mother of 3 children jailed for stealing neighbour’s Ghc5 could not hold back tears as she narrated how she had no means to feed her hungry children on that fateful day.

Akua Akyaa recounted her ordeal to Crime Check TV GH at the Kumasi Central prison where she was spending her jail term without having any idea how her three young kids were faring in her absence. According to her, she was working at a certain chop bar where she was being paid Ghc5 until the owner of the business asked her to stay home temporarily because her daughter who had returned from school would be helping her for time being. Life then became unbearable for Akya and her children she had with two different men, all of whom have abandoned her.

She was compelled to pick a neighbour’s Ghc5 to buy food for her hungry children one day without asking first, and it brought about an altercation.
Source: Pulse Ghana

This shouldn’t happen. This country has enough to provide for the needy. Corrupt “leaders” steal state money and go free. I can’t fathom out how crazy this country is!

So now that that she’s jailed, what’s the fate of the children?

I refuse to call these senseless, corrupt politicians in power leaders. Leaders lead, our politicians loot.

Unnecessary jailing leads to prisons getting overcrowded and conditions worsening,

This is a petty crime. Not prison worthy

@siaw I was so happy today until I came across this story which made me totally sad and I felt like crying. How can you jail this woman with four kids for stealing 5 cedis whiles our so called leaders steal us in millions yet our constitution protects them. I’m so sad and with the judge who sentenced this woman to prison will never see light as he/she goes about her duty. This is so heartless. What is the fate of this kids at all? Who is going to take care of them? Hmm​:sleepy:

@Kwabena Bro say that again. Our prison are meant to keep our so called leaders who steal our money in millions but what are we seeing. Our constitution is meant to protect them whiles we the ordinary citizens faces harsh and heartless judgment for petty crimes. This is so sad​:broken_heart:

What happened to NAM1 and MenzGold? They are walking as free men right? This is how fucked up this country is.

Numerous scandals hitting government officials each and every blessed day but none has ever been prosecuted. In the words of Donald John Trump, Africa is a ‘shithole’.

Haha yeah, Africans got all defensive when Donald Trump told the truth, we’re truly a “shithole” country, no doubt.

What happened to NAM1 and MenzGold? They are walking as free men right?

Isn’t this sad. Many were rob with this Menzgold and yet NAM 1 is a free man. Do you remember the case of Opuni the former head of cocoa board? This man spent millions of money and yet we’re not hearing anything about it. The country is so fucked up

The funny thing is, the constitution covers them in everything they do most especially covering them up when they steal money belonging to the country. With such a country and it’s leaders, how can we reach the top. Thanks to Donald Trump for that speech, indeed Africa is a “shithole”

Chale stealing is stealing. Whether big or small money , she was caught stealing and derseves punishment. Let’s not glorify crime on any level cos whats wrong is wrong. About politicians stealing big money and all that, abeg no vex ooo, court convict them?

I stopped calling them leaders. I’ve noticed a lot of Ghanaians refer to them as “leaders” but I don’t see the “leading”

About politicians stealing big money and all that, abeg no vex ooo, court convict them?

That’s the problem, why is there no conviction in the first place?

Yes maybe because there’s no sufficient evidence to all allegations we be making. Those allegations could be propaganda driven. You guys are citizens and cam equally sue them if you see any infractions in procurement or any dealings. Have you heard of Right to information law/bill? You can request for any information and use that to sue any government or private individuals if you find them guilty of a crime or corrupt act.

Chale stealing is stealing. Whether big or small money , she was caught stealing and derseves punishment.

I’m not against fact that she stole just 5 cedis and was sentenced to imprisonments. If this woman is sentenced for stealing 5 cedis then our so called leaders deserves what? But how many times have we seen our leaders standing in the court of law for trials for looting of our state funds?

I stopped calling them leaders.

They seem dead to me as well. When growing up I thought when you grow you automatically get wiser but our so called leaders proved me wrong by showing me that it’s a lie

Isn’t this questionable? The constitution suits them so well that in whatever they do they get protected under the law

Have you heard of Right to information law/bill

I do know of it but the question is, Does it even works here in Ghana? We live in a country that things like this are kept a secret from us.

Have you heard of Right to information law/bill?

I didn’t even know this was a thing. How serious will they take me if I go and say I’m suing NAM1 considering I wasn’t even a victim of his scams?

Even if you’re a victim of NAM 1 scam and you’re able to acquire all the evidence through the so called Right to information bill/law, you’ll even get tired when you sue NAM 1 as the court will always postpone your case against him so many times that you’ll get tired and walk away. That’s Ghana for you