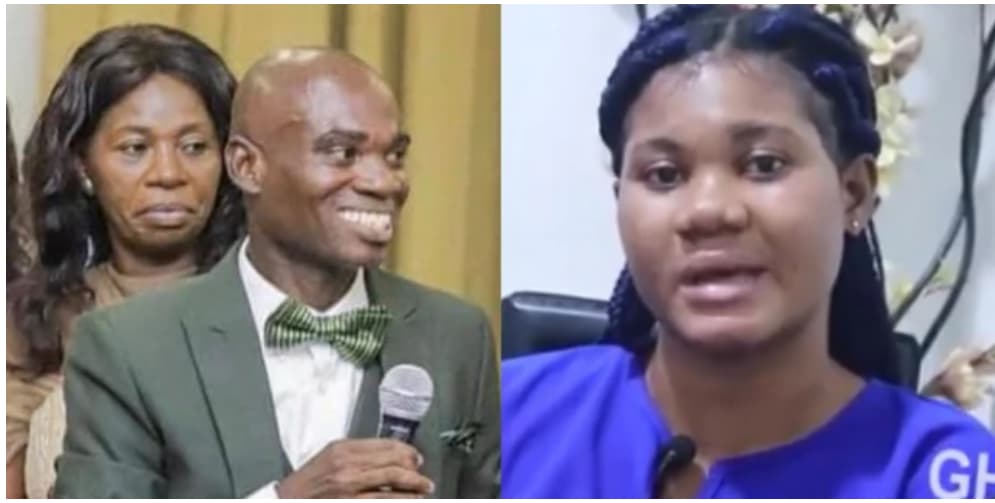 According to the young lady who identified herself as, Matilda, she has completed SHS last year but met Dr UN whilst she was in school. "Before my WASSSCE, I went out with a friend to have fun and we met Dr UN, the one who organized (the fake party)

Matilda emphasized that he knew him very well as Dr UN the moment she saw him and recounted that " he wanted us to talk but I was shy so he took my number so when I got back to school, we started talking".

During an interview with GH Page, Matild confirmed that started dating back then and he promised to marry her. “We were in a relationship, he proposed to me and I accepted, so we go out to hotels and more,” she said.

Speaking about her pregnancy, Matilda said “about three months I have not seen my period so I went to buy accurate to check and it showed I was pregnant” and added that Dr UN is however refusing to accept responsibility.

“When I call, I don’t get him, when I do too he will tell me he is busy working on his songs so he needs peace to work,” Matilda who lives with her sister in Kumasi recounted.

However, Matilda insists that it is Dr UN who has impregnated her. She even disclosed at some point Dr UN asked him to come and see his medical doctor to abort the pregnancy for her. “But I told him, I can’t do that because I can die and it’s a sin,” Matilda said.

Dr.UN doing the most in this country. It is still not an established fact that Dr.UN is responsible for the lady’s pregnancy, also, we can’t confirm the girl’s actual age time know if she’s indeed 17. Until we hear from Dr. Un, it remains just an accusation. People do this lately to become popular

If Dr. UN can give fake awards to *** Chairman Wontumi, Sarkodie, D Black, Daughters of Glorious Jesus, Berla Mundi, DJ Black, Prof. Ebenezer Oduro, Nathaniel Attoh, Johnnie Hughes, TV3,** then he is certainly responsible for this pregnancy. No aspect of this guy is real.

And this girl too is very “foolish”. Your parents never sent you to school to go and have fun. The basic rule is to learn and make them proud. Look at what you’ve done. Time to face the consequences of your recklessness. I am very sure she dumped her boyfriend in the process because she’s seen Dr. UN. Go and ask Sarkodie and co. and they will tell you.